Stan Curtis wrote,“The Boothroyd-Stuart team made a mock-up of a tuner using a cut-down AC1 case. The design never went further than an empty case.

I designed the first tuner which was shown at Harrogate.   It had a sexy black PCB and had a very high spec but it was too expensive.  So I redesigned it as the simpler &  less costly FM1.

Subsequently I re-designed the tuner as the SFM2 which was easier to manufacture (separate LED board) and had a better AFC circuit”.

The very rare FM1 and SFM2 Lecson tuners are highly sought after by collectors today. Approximately 23 are known worldwide to existing in working condition. Prices have risen accordingly and typically exceed $500.  One recently sold in excess of 1,800 pounds.

“The FM1 was a successful blend of the architectural austerity of the line drawing and the romantic use colour in neoplasticism”. (Kostas)

“There’s something just spectacular about the Lecson FM1 tuner. It’s the ultimate grockle bait with all those LEDs, colors, and the big tuning knob.  Somehow the box takes you back to being eight years old again and being let loose at the carnival.  You spin the magic knob, flip a few switches, the lights move all about- and you are rewarded to a brand new sound with every twist of the wrist.  No photograph could do it justice. This thing is so cool.  I does everything but hand out prize redemption tickets. My only advice is just get one if you can. You’ll have a hard time prying it out of the previous owner’s hands!” (JM) 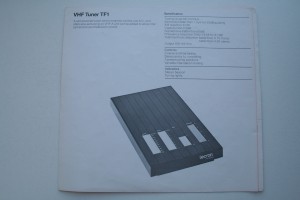 The concept of companion tuner to the AC1 and AP1 was originally developed during the Boothroyd/Stuart era.   Originally this was envisioned as a television tuner for the UK domestic market.  Although advertised, it never went into production.  The concept was reincarnated during the Stan Curtis Lecson era.

Lecson Tuners: A Lover’s Guide (from “The Gentleman” Kostas) 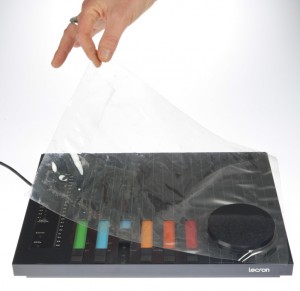 This document provides information on the Lecson Tuner. Version 1.0 summarises the relevant posts from the inception of the Lecson Audio forum (6 Aug 2008) to the 6 Dec 2008. It reflects Kostas’s editing bias.

History of the Lecson Tuner

After the Lecson Audio went into receivership in 1975, Lecson Systems bought its assets and introduced a series of new Lecson products, including the Lecson Tuner. Stan Curtis, head-hunted from Cambridge Audio was the designer behind the Lecson Tuner.

The Lecson Tuner series had 3 major re-incarnations over a period of less than three years (1976-1979).

The first Lecson Tuner was a prototype shown with great success at the Harrogate Audio Show in 1976. Its design both internally and externally is different from the rest of the series. As a tuner it was on par with the best tuners designed before or after by Stan Curtis. An idea of how it might have looked like could be taken from a contemporary advert and the contemporary press release – both uploaded in the file section of this forum.

It is worth noting though that the exhibit in Harrogate was different from the prototype in that its normal top was replaced by a clear acrylic top and the circuit boards with black solder resist and gold-plated all the tracks. Although the exhibit was stunning, its production cost was prohibitive, so Stan Curtis went back to the drawing board for the production of the FM1. The whereabouts of the prototype exhibited inHarroware not known. There is no photograph of it – but one might turn up in the future.

The FM1 was designed to meet a cost point and be an aesthetic match for the AP1 pre-amp. It was visually stunning, but it was not as a good as tuner as the prototype because of the internal space limitations. But it incorporated for the first time the toroidal transformer (the designer’s trademark).

According to a publication of that era (Hifi Weekly & Record Review, Nov 1976, Page 35) the FM1 was not expected to be available in the UK before the start of 1977 because of ‘export commitments’. 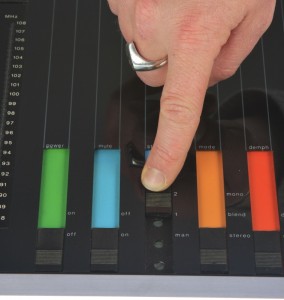 The FM1 has four preset tuner memories hidden under one of the sliders.  Each is adjusted using a flat head screwdriver.

The FM1 had two limitations. The tuning LEDs were mounted directly onto the motherboard and they were very difficult for the production staff to align with the holes in the acrylic panel. And, the AFC (Automatic Frequency Control) circuit was not always operating optimally.  Hence the SFM2 was born. 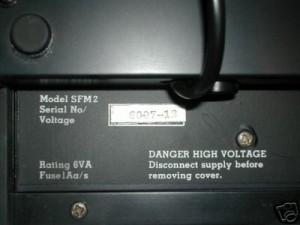 The FM1 and SFM2 are very similar in circuit design and appearance.  Apart from some minor power supply changes, the primary changes were two. The LEDs were put on a separate display board connected to the tuner board with a ribbon cable; and, a new, better working AFC circuit was introduced.

The serial number system employed for the tuner was not sophisticated. It did not include date coding. It is a two-part serial number type-written on a metallic silver foil strip glued at the back of the Lecson Tuner case.

In what follows I am summing up the relevant information for each of the five tuners that have (some) of their details in the public domain:

Is there a Lecson Unit Number Coding System applied to the Lecson Tuner?

Yes.  It is elementary and it consists of a two part serial number that has the general form of <600x/yz>.  <x> is more likely to stand for a model revision or a significant event in the tuner history. <yz> refers to the number of the unit in the production run for the specific <x> model/event. Higher numbers most likely to refer to later produced units.

From the five Tuners with information on the public domain we could extrapolate the following:

6003:  The last run of FM1 cases with FM1 inner circuits. Characterised by the AFC Tuning LED and the single preset volume control at the back.

6004: The first run of SFM2 Tuners in FM1 cases.  Characterised by the absence of AFC Tuning LED and the presence of two preset volume controls. Probably aligned by Stan Curtis himself.

6005: Similar to 6004. Highly unlikely to have been aligned by Stan Curtis 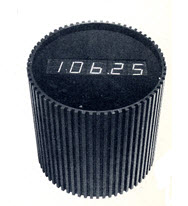 Only a few DR1 Digital Readouts were produced.  None are known to currently exist, although there is an on-going project to recreate one from scratch.

Stan continues, “The acrylic tops were always screen printed on the reverse side and then over-printed with black ink.  The tuning panel was printed on the top because the acrylic is too thick and the diffraction would make the printing difficult to read.

Some of the early glass topped AC1s were printed on the top side. Switchable voltage had to be dropped in the 1970s because of the new safety regulations. The same was true of the very convenient 120 volt style two pin outlets.

Some tuners went to the USA but not many The FM1 and SFM2 are very similar in circuit design. The primary changes were a new circuit board with a separate display board connected by a ribbon cable; a new AGC circuit without the LED and some minor power supply changes.

The FM1 was far from perfect but it should never drift.  It has a an AFC circuit which is rock solid. I spent a lot of time on it.  Mind you after 30 years and with the comparatively poor components of 30 years ago it is unlikely that anything is working as per drawing.

The FM1 was never designed to be the best of tuners (my previous Cambridge Audio tuners were better) but to match the AC1 which really backed me into a corner. I did the best I could given the lack of internal space. Remember this was pre-surface mount components.

No don’t crack the box otherwise you’ll have to adjust all the trims when you re-assemble it, move the can slightly an the alignments go off.   Just scope it. If you can find the signal and the frequency changes with tuning you should be able to design a single transistor rf amp to boost it.

The de-emphasis is set by two capacitors inside. Different values for UK and USA. The Dolby de-emphasis was added because I had a slider spare so I took a punt on Dolby broadcast taking off in the USA.

I’ve uploaded the front end info onto this site. The memory cells are gradually waking up.  I took a feed from the NPN local oscillator via a tiny ceramic capacitor; something like 47pF or 100pF into a FET gain stage whose output was the LO output.  But not all Lecson tuners had this mod; just some. It is 30 plus years ago and some 400 products have passed my way since then so don’t expect me to draw a schematic.

I also unearthed a photo of me in my office at Lecson; looking totally bemused by it all. Oddly enough this site has got my juices going again so you may well see some new designs; if I can find my Weller soldering iron!”

I can’t remember that level of detail after so long. However I remember the local oscillator output from the front end was tiny; almost invisible on a scope so I put a FET buffer stage on the few tuners that had the DR1 attached otherwise the signal never reached the DR1 input.” 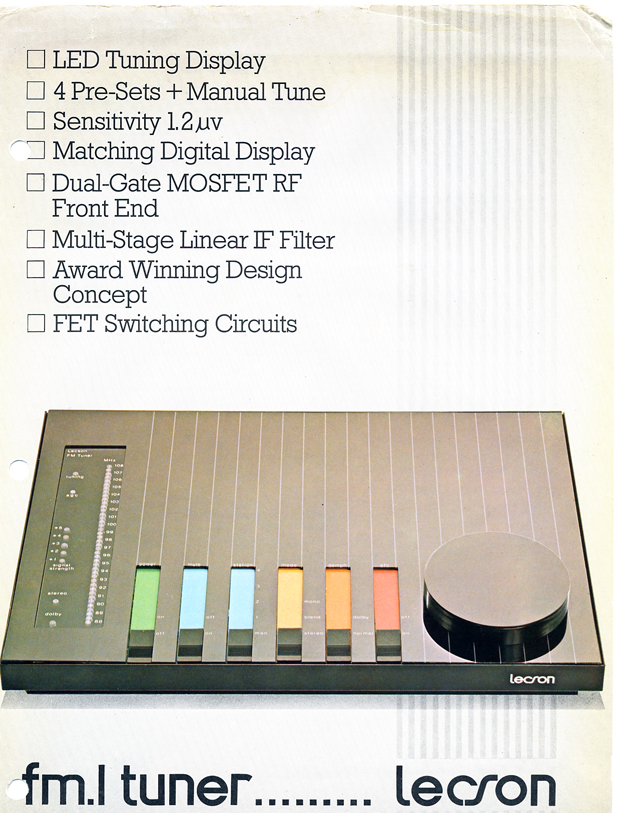 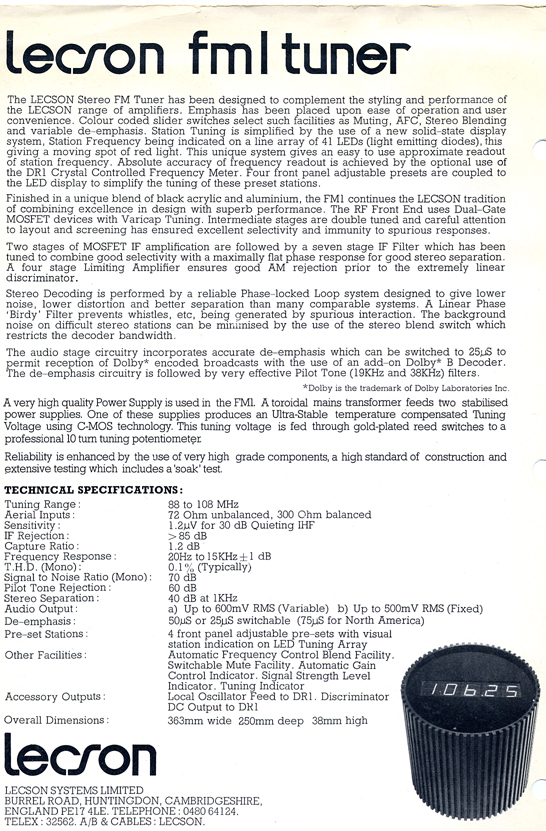