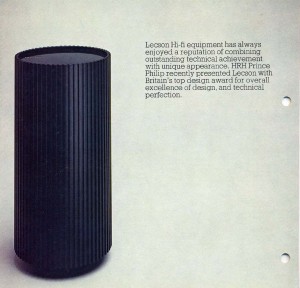 Apparently Allen Boothroyd’s original inspiration for the Lecson power amplifier range came from a visit to the Ely Cathedral- more specifically the heating radiators within the cathedral.

A large cylindrical heat exchanger for the parishoners

A somewhat smaller heat exchanger for the audiophile

Bottom connections for the AC1 preamplifier and two sets of speakers

Speaker and preamplifier connections close up

The AP1X is physically identical in external appearance to the AP3 amplifier.

“This was the AP1X which could be described as a de-tuned AP3. The cooling fan was removed; a new smaller power transformer was fitted together with modified versions of the original AP3 circuit boards.  The end result was a 70 watt per channel amplifier which sounded good and was very reliable. 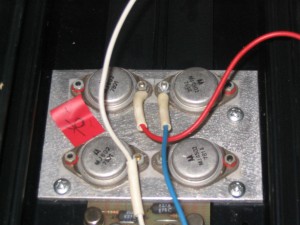 The AP1X quickly killed off most of the AP1 sales which was good news from the factory’s viewpoint.  However dealers were asking about the AP3 and something had to be done.

I designed a totally new circuit board which used ultra tough Motorola transistors; two pairs of MJ802; MJ4502 per channel. These transistors did not need any conventional short-circuit protection because they were good for 30 amp peaks of current.”