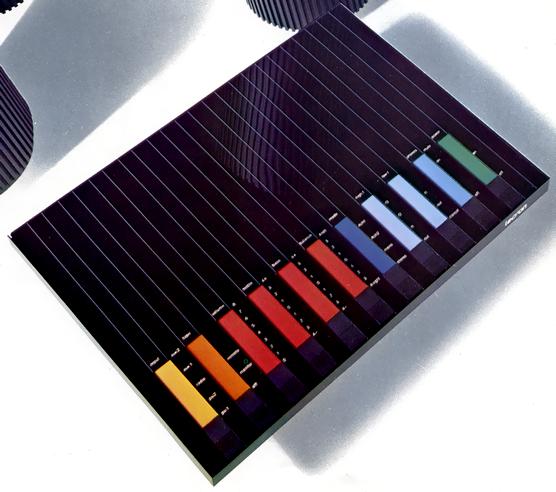 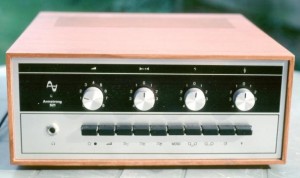 To understand what a revolution in design the Lecson AC1 and AP1 were compared to their contemporaries requires a quick look at the Armstrong Design Council award from a few years earlier. 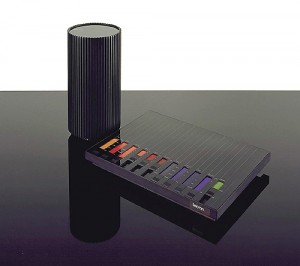 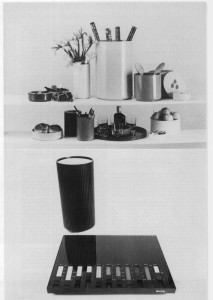 “The original AC1 had a top panel made from strips of thin glass held onto the case by double-sided tape. Unfortunately when the temperature rose the adhesion was reduced and the glass moved or fell off so it was eventually replaced by a one-piece acrylic top.

Instead of conventional switches the AC1 used bar magnets attached to the slider controls; to operate glass encased reed switches which in turn applied voltages to junction FET switches. This was a very nice arrangement but proved to be a production nightmare. First all the FETs had to be pre-measured and matched into sets and secondly aligning the magnets and the reed switches was a slow tedious business.

The AP1 used a new balanced push-pull circuit and produced a sound quality that was much liked at the time but it did suffer from unreliability mainly because of failures of the GE driver transistors. AP1 was designed by Bob Stuart. It sounded really nice and smooth but was difficult to manufacture.

The input stage comprised of a balanced pair of long-tailed pairs of transistors and in order to get the distortion within the published specification both pairs had to have similar performance and this could be difficult to achieve and could involve having to change a lot of transistors.

This amplifier also proved to be rather inconsistent. If you got a good one it would last forever yet others failed in days. Particular trouble points were the driver transistors and the small tantalum bead capacitor in the feedback network.

I joined Lecson I made some changes to the AP1 circuit including changing the driver transistor type. However I no longer have any documentation and cannot remember the other changes. 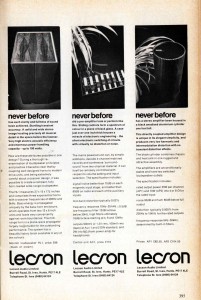 Unfortunately Lecson failed just as the first batch was about to be delivered. When I bought the assets of Lecson I sold the completed amplifiers to enthusiasts then published the design in “Electronics Today” as the “System A amplifier” and sold the remaining parts as kits. Some years ago the publishers told me it was their most popular article ever and it was re-printed in different digests four or five times.

The AC1 remained unchanged most of its life. The first batch had tops made from strips of thin glass. This looked good but was hopelessly impractical and the glass was quickly replaced a by a one piece acrylic top which was screen-printed. Minor changes and component variations were made but essentially it performed well apart from the rather poor headroom of the phono cartridge input. 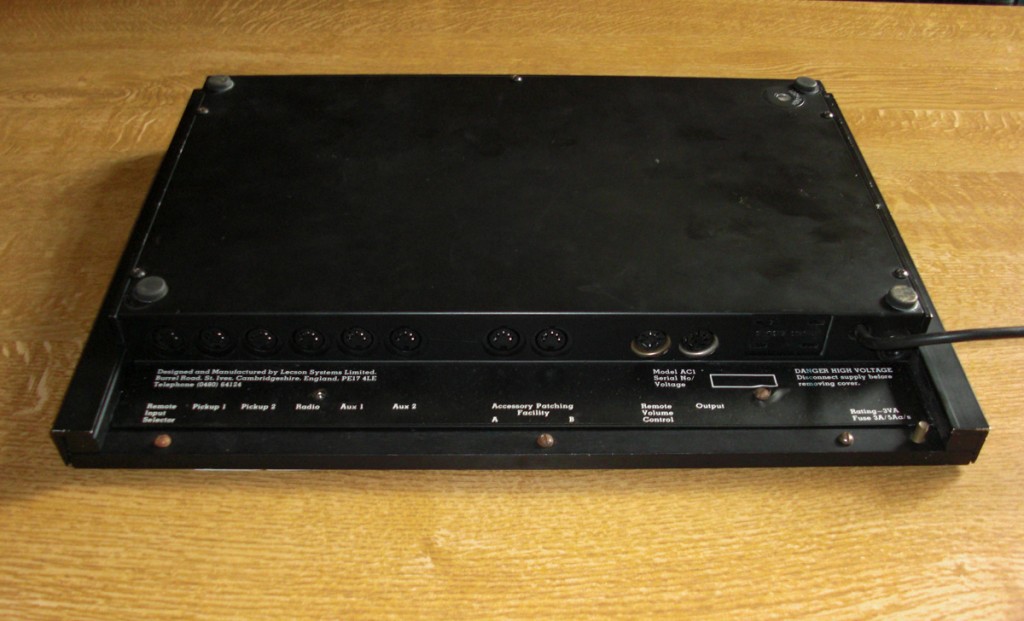 Of course the production managers (first “Pherdie” then Derek Sutton) both hated the product because it was hard to manufacture needing selection of FETs and tantalum capacitors; a lot of mechanical adjustment and with acrylic tops that marked easily so that there were too many rejects. 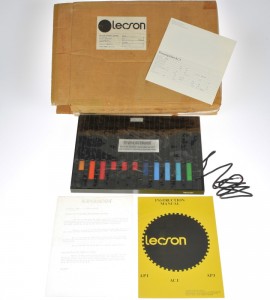 It was not possible to update the AC1 because somewhere along the line the original artwork for the board had been lost and boards were just re-ordered from the board maker who had a photographic plate for the design. In those days PCBs were laid by hand using black or red tape and a scalpel. I certainly didn’t relish trying to relay the original double-sided board. It would be far more productive to design a new pre-amplifier and a new board. 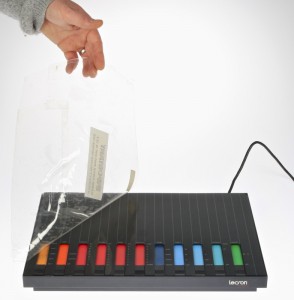 I had begun work on a replacement which drew heavily on the Cambridge Audio Classic with its use of hybrid circuits and incorporating a phono stage with 50 dB of headroom but apart from one “chewing gum and string” prototype this one never saw the light of day and the design work ended when I left Lecson to start Mission. (Stan Curtis) 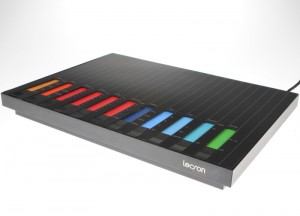 The circuitry of the pre-amplifier (AC1) is designed to the technically very respectable figures of 70dB signal-to-noise ratio. Taking pre- amplifier and power amplifier together, distortion is limited to about 0.02 per cent from 30Hz to 20kHz. 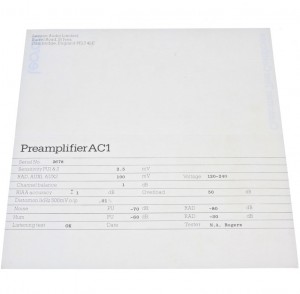 For this performance, the power output is rated at 35W per channel driven into an 8 Ohm load; maximum power is 58W a channel and a new version of the power amplifier (AP2) raises this figure to 100W making it one of the most powerful units available. At these powers, separation of pre-amp and power amp makes good technical sense: more power means more heat which might, in a single enclosure, damage the pre-amplifying circuits.

But the designer’s most striking achievement is the 1.25 inch shallow preamplifier, fitted with colour-coded slide controls in place of conventional knobs, set between strips of glossy Perspex (an original plan to use black glass was discarded).  Lecson hopes it has eliminated the dust-damage problems associated with earlier slide control amplifiers. Watt black aluminium extrusions make up the sides of the enclosure.

So far as I can remember none of the AC1 boards ever had a solder mask. When I got to Lecson the original AC1 artwork had “gone missing” so we had to manufacture boards using the photographic negatives and no changes were made. Early boards did use rivets to connect the top &amp; bottom layers

Most of the metalwork was anodised black but as a result the colour of every piece looked different so the finished product would have looked different. Therefore a top coat of satin black paint was added; using aerosol cans of paint!”

This custom cable is available from one of our Lecson Audio Group members (Tim).  Rather than try to make one yourself, we strongly recommend contacting him first.   The amplifier requires not only a right angle DIN connector, but the pins are offset. 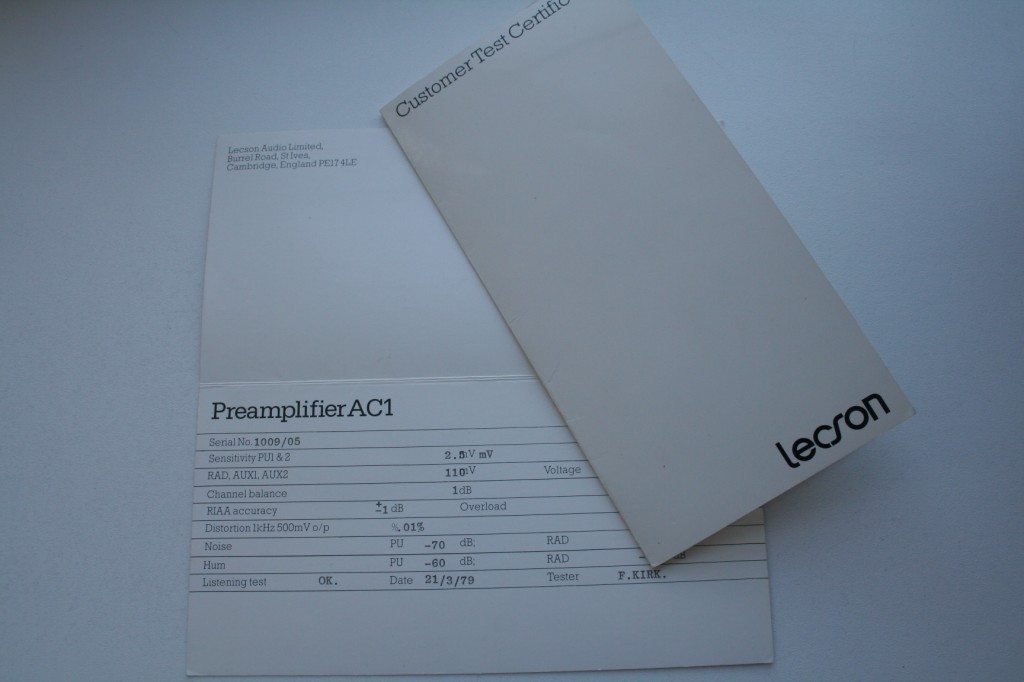 “My AP1 also came with a Test Certificate – a quality card which is dated March 1975 although I didn’t get my amp until late Summer 1976.  I think the my local retailer, HIFI Consultants of Peterborough, bought a batch as part of Lecson Audio’s bankruptcy and these went back to Lecson Systems to be checked over by Stan and his team before delivery.  I remember having to wait for it to come back from Lecson – whoever did it obviously did a good job as it has only failed twice in 30 years+.” 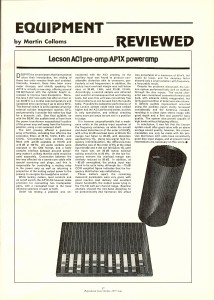 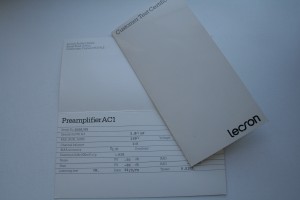 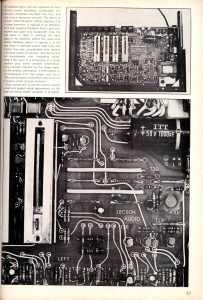 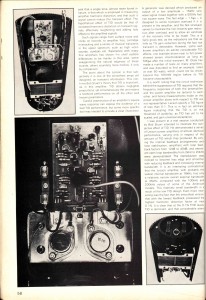 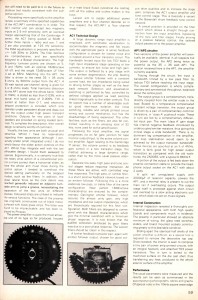 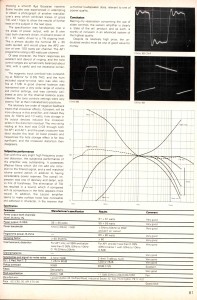